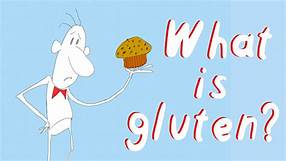 What is GLUTEN? According to my handy Taber’s Cyclopedic Medical Dictionary – “Gluten is vegetable albumin, a protein which can be prepared from wheat and other grain.” You can free your diet of gluten by avoiding all products containing wheat, rye, oats, barley, or vegetables such as beans, cabbage, turnips, dried peas, and cucumbers. Rice, potatoes, corn and cornmeal are allowed. Gluten allows dough to rise – gives texture to bread.

My further research expanded on this. I hope I can help you understand the truth of what gluten is all about.

So…what are ‘gluten related issues’? Why do people think they have gluten issues and should be eating nothing but ‘gluten-free’ foods?

The latest “hysteria” seems to be related to gluten this, and gluten that. Is it a “fad”? Could well be. The 3 types of issues related to ‘gluten’ are: Celiac Disease, Wheat Allergy, and Gluten Intolerance. What are they and what are the differences between them?

CELIAC DISEASE – is an autoimmune disorder which gluten intake causes to worsen. However, Celiac Disease is seemingly rare. This disease “occurs in some people when fragments of gluten bond with intestinal proteins and provoke a misdirected immune overreaction from white blood cells, destroying the microscopic fingers called ‘villi’ that line the small intestine and normally absorb nutrients.” This causes the intestine to function incorrectly – thus belly pain, diarrhea, iron deficiency, etc. It is usually misdiagnosed. “Proper diagnosis is with a blood test and an endoscopic biopsy of the small intestine. Only 1% of the world’s population has this disease. Many physicians are not familiar with its signs.”

WHEAT ALLERGY – In this condition a wheat specific antibody called an IgE causes hives, anaphylaxis, sneezing and wheezing. “There is no good test for it. Blood tests called RAST are usually unreliable. e.g. “only 1 in 8 children or adults with a positive Ige test for peanuts is truly allergic.” “Because RAST tests can screen for dozens of possible allergies at once, there is a danger of over diagnosis, especially when interpreted by non-specialists.”

GLUTEN INTOLERANCE – is the most confusing. “This condition is neither an autoimmune disorder, like Celiac Disease, nor an allergy, like Wheat.” There is not even a mediocre blood test for ‘gluten intolerance.’ The diagnosis is really someone’s subjective feeling of symptoms to include bloating, bowel changes and/or mental fogginess after eating gluten. Thus we have what is called “pseudo-scientific self-diagnosis, because people believe they have illnesses caused by magnetic fields.” World wide, many scientific tests have been executed to decide the cause of ‘gluten intolerance’. The conclusion is “that many sufferers might not have gluten problems, but sugar problems called ‘fructans’ in wheat products.” Again, “almost 2/3 of the people who think they are ‘gluten intolerant’ really are not.”

I am not going to talk about what or what not to eat (gluten-free foods). It is up to you to draw your own conclusion from the above mentioned facts. Can what you believe to be a ‘gluten’ issue be a ‘diet’ (other foods you eat) issue? However, for a start there are grains that are not considered ‘gluten grains’. They include: oats, rye, quinoa, chia, spelt, buckwheat, amaranth, millet and black rice. These grains are considered healthy plant-based, protein vitamins, minerals and a variety of phytochemicals that will improve your health.

What to do? DETOX – start with fruits, melons, and herbal formulas. See my Detox Plan – filter and eliminate the toxins from your body. Visit us at the FYI Health Talk Store.

Love to you all. MAY GOD RULE!