There are many milks on the market today. What to use? Dairy versus Alternative Milk?

Quoting Dr. Robert Morse N.D. –  Healer and Author of ‘The Detox Miracle SourceBook. “Cow’s Milk is for Cows. There is nothing bad about drinking milk from the time you first open your eyes at birth until you are two years of age. That is, provided the milk is from your mother, and is fresh, raw and natural.”

“Cow’s milk tends to be high in proteins, minerals and fats – a necessity for baby cows that will grow to 300-500 pounds in one year.” Human babies do not grow that fast, and because cow’s milk is a heavily concentrated milk it is difficult for infants to digest…thus you have a baby who suffers with digestive issues and mucus congestion in the sinus cavities, lungs, brain and ears. Still quoting Dr. Morse, “Many types of allergies are also created from the excessive congestion that starts with cow-milk consumption.” “Adults cannot digest milk at all and develop deeper congestive problems as they get older.” The “milk now becomes highly irritating to the mucosa of the GI tract, which causes even more mucus….which causes a heavy mucoid plaque to build up on the intestinal walls.”

Pasteurization – or heat changes the chemistry of milk, as well, it changes the milk’s nature from alkaline-forming to acid-forming. It destroys vitamins especially vitamin C and B-complexes, saturates the fat, and binds some proteins to minerals and some minerals to minerals. If you fed pasteurized milk to a baby calf instead of its mother’s milk, it would die. Therefore, when a mother cow dies or rejects its calf, the baby has to be fed a special formula manufactured for cows, that mimics the raw, mother cow’s, milk.

A mother cow weans her calf off of her milk within 6 months. Then, what do they eat? GRASS!

As mentioned above, with humans – mothers milk is the best, but still, the child should be weaned from mom in a specific time period. Cow’s milk came into being as a staple to replace mother’s milk when the mother’s milk was not available, was of poor quality or the human mother didn’t want to nurse, or was unable to produce quality breast milk. Scientists eventually came up with powdered as well as ready-made liquid baby milk formulas.

In today’s new generation, dietary concerns with milk, sensitivities and/or just plain curiosity has led the public to choose other types of milk to drink and cook with. The following are some of the alternative milk products on the market today – Soy, Almond, Coconut, Rice, etc. But, what do we know about them?

SOY…there are many brands with different nutritional values. Basically soy milk, provides more protein. Dr. Andrew Weil (founding director of the Arizona Center for integrative Medicine) suggests you stay away from any organic brand of soy that contains the thickening agent “carrageenan”. Yes, many of the alternative milks have additives. Myself, I do not like or use soy milk. Dr. Frank Lipman (founder and director of Eleven Eleven Wellness Center in New York City) says, “that limiting soy is a good idea due to soy’s prevalent pesticide saturation and its researched links to thyroid, endocrine system and sex hormone dysfunction,” and if you choose to use soy – “stick with certified organic (preferably fermented versions) such as miso, natto and tempeh…and only use or eat sparingly, no more than twice a week.” I stay away from soy completely.

COCONUT…coconut milk is known to be high in medium chain

triglycerides, is very filling, and is a fat burning food. It is also the closest to being like human mother milk. It, as well, contains trace minerals such as manganese, phosphorus, magnesium, iron and copper. Coconut milk is high in fat…but it is the good fat. Don’t stay away from it because of the fat content. I like coconut milk but am not and never have been a consistent milk (of any kind) drinker. When I do drink or use milk to cook with my choice is Coconut Milk. It is great on cereal, and for cooking. I am experimenting with it to make yogurt. Because of its thickness it seems to coagulate well so that the yogurt is not running, and has turned out to be pleasantly thick without having to add a thickening agent. If you read the label on the store-bought yogurt, you will find that many of them use thickening agents – especially the Greek yogurt. Coconut milk is used and is delicious in Asian style soups, and curries.

ALMOND MILK…the first time I tried almond milk I made it myself. It is low in fat, has about 40 calories and contains 8 grams carbohydrates, 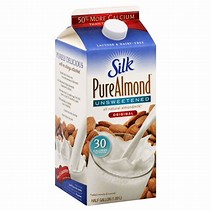 protein, and calcium – of which almond milk is not high in. Some people like it and some don’t, because of its nutty flavor. I find it a pleasant tasting milk to drink and use on cereal. It does not work well as an alternative milk to use when making pudding or yogurt. It needs an added thickening agent. Not even the thickening agent in boxed pudding mixes (cooked or instant) is enough to thicken the pudding. So, enjoy it in other ways – drink, smoothies, cereal, etc. The alternative Nut Milk I like better

is CASHEW MILK. I haven’t used cashew milk for anything but drinking. Will experiment in the future. Want to make your own ALMOND MILK….here’s how!

RICE…milk is a milk I have never tried. However, it is high in vitamins and calcium – when fortified. It can be made from white and/or brown rice. I

t is the least likely of the alternative milks to trigger allergies. It is low in fat and protein and high in carbohydrates and is less creamy in texture.

HEMP MILK…New to me – is made from hulled hemp seeds. The Pro for Hemp Milk is it contains 10 essential amino acids, including Omega 3 and Omega 6 fatty acids, which are vital for healthy functioning of the brain. The Con for Hemp Milk, as I have read, is that it is grassy-tasting and is not good in coffee as it tends to separate in the hot coffee. I don’t drink coffee, so I won’t be using this milk for coffee, and I probably will not drink it.

The seeds can be purchased in health food stores. I haven’t seen them or the milk in my Health Food Store, but then I haven’t looked for them. As for the Omega 3 and Omega 6 fatty acids, again, good for healthy brain function – they can be found in other food sources.

What does the future hold in the way of milk? Probably many more sources and choices, some organic and/or natural, and probably all fortified with supplements. What milk you choose to drink, I leave in YOUR CAPABLE HANDS!

Love to you all….become a follower of my blog by clicking on the link in the lower righthand corner.  Thanks.  GOD BLESS!!